Wednesday’s day trip to London for the Royal Academy’s 250th summer exhibition put another tick on my Life’s for Living list.  It was a full-on day in city heat but I like to think that a change of scene can be a re-fuel for writing if not a battery re-charge.

On arrival at St Pancras station, I was greeted for the first time by Tracey Emin’s message of love to the rest of Europe: 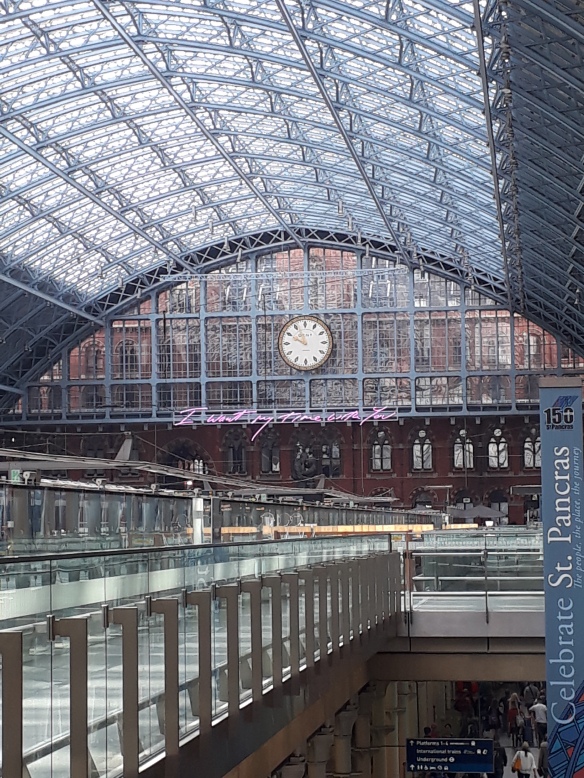 With the exhibition extending over more rooms than on my last visit, I spent over three hours taking in the eclectic mix of subjects, styles and media that typifies the RA’s summer exhibitions.  I became fascinated, too, with the ways in which others engaged, both on first response and at close quarters, with particular exhibits. 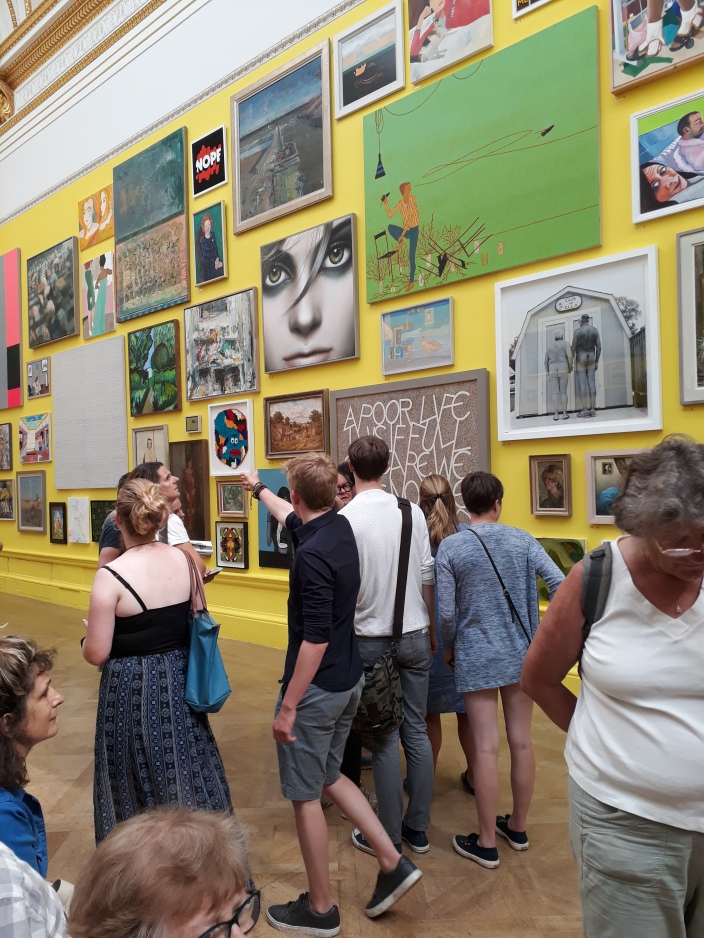 My personal favourites included labours of love, elements of surprise, titles as messages, the power of words harnessed, classics made current, quirks and the downright funny.

I used to feel so alien, so out-of-water in London but, over time, I’ve come to terms with that feeling of anonymity I experience there, more than anywhere else I’ve ever visited.  In fact, it’s quite freeing, on occasion.  Wednesday brought conversations with strangers: on the choice of breakfast breads with a woman on the next table at Le Pain Quotidien; on the joys of new babies and breastfeeding with a young mother as we shared a bench at St Pancras station; on poetry and discovering friends-in-common with three fellow passengers on the return train journey to Market Harborough (my copy of Under the Radar magazine proved a great conversation starter).

From my TBR pile:

Since finishing Rowan Coleman’s The Summer of Impossible Things (I do like novels that that play with the concept of Time), I’ve read two poetry books: Marion McReady’s Tree Language (its recurring themes and subjects are almost a series of studies; I enjoyed these quiet but affecting poems) and S. A. Leaveley’s How to Grow Matches (there’s a range of styles and sources of inspiration in this short collection of poems towards a ‘template’ for the visible, powerful woman).  I’ve just started reading Nell Stevens’ Bleaker House: a fact-fiction fusion on how far one writer is prepared to travel in order to fail to write a novel (and become a writer in the process).

I was mistaken in thinking that the Bridport Poetry Prize longlist was to be published last Tuesday.  Only the longlist for the Peggy Chapman-Andrews award (First Novel) has been announced online, so far.  The rest of us will have to wait until September (winners and highly commended for Poetry, Short Story and Flash Fiction, by email) or October 22nd (full competition results published online).  Oh, well…

2 thoughts on “Re-fuelling the writer: a day trip to London”