Having read an extract here, I purchased Brown’s Debut collection at States of Independence last month.  I read it over two coffee stops, finding it a real page-turner.  Two poems, in particular, made me smile: ‘Poetry Library’: ‘…the nepotistic quarterlies lining the walls/a paper network of favours/I will never be able to anything offer.’ and ‘On the way to Torriano’ – I love the audacious idea that performance giant Hegley might learn a thing or two from an eight year old boy, missing his gig into the bargain!

I very much hope that Brown will read at Leicester Shindig! in the near future.

Tuesday 3rd April: Coventry’s monthly open mic poetry event at Taylor John’s House – an arch housing a bar and bijou side room beneath a car park in the Canal Basin. 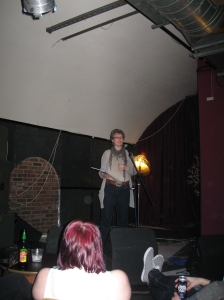 Me at the open mic

Colin Dick, artist and one of the original Tin Angel poets.  Read more about him here.  Barry Patterson read a series of poems inspired by Colin Dick’s paintings from his book, Seeing Life, including a pantoum, ‘The Tin Angel.’  Jackie ‘Scrubberjack’ Smallridge performed an impressive patois freestyle piece.  Antony Owen, a war poet for our times, read ‘Fat Man’ and ‘Dresden’, which wowed me when I first read them as facebook notes, and ‘Scent of a Son’ from his pamphlet, The Dreaded Boy (Pighog Press).

Michael McKimm, guest poet for the evening,received an Eric Gregory Award in 2007. Born in Belfast, brought up in North Antrim, he studied English at Warwick.  He now lives in London and works for the Geological Society. His set included ‘At Allihies, Co. Cork’ (published in Magma), ‘Resurrection,’ ‘The Iraqui Librarian,’ ‘The Land Leak’ (inspired by a geological survey of Ireland in the 1820s), a sonnet sequence inspired by the folklore of North Antrim, and ‘Because we could not dance at the wedding’ (read it here).

The young set made a significant contribution to the open mics, including students and post grads from the Warwick Writing Programme and Teaching Fellow George Ttoouli.

Despite feeling a defector from Leicester’s Word! (my usual fix on the first Tuesday of the month) and a long drive home ahead at 11.15 PM, I really enjoyed my first Nightblue Fruits and intend to venture out of Leicester more often.